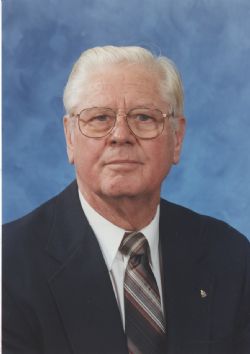 Paul E. Larson, age 95, passed on November 12, 2022 at Pathfinder Place in Fremont, NE. Paul was born at home in Fremont, NE, to Elmer and Pearl (Bishop) Larson. When Paul was 11, his mother died, and soon afterward his father moved out of state for work. His aunt Lil then raised him to adulthood and he was forever grateful to her. Paul was preceded in death by his parents, wife Joan (Cunningham), brothers Donald and Raymond and wife Delores (Mohr) Furstenau.

Paul graduated from Fremont High School in 1944 and attended Midland Lutheran University for one year. He then served in the Army Air Corps from 1945-1946, after which he returned to Fremont and worked at Hormel for 41 years.

Paul had many interests, hobbies, and talents. He loved hunting. He was a member of the Nebraska State Pistol Team for several years and competed at the National Pistol Matches at Camp Perry in Ohio.

He planned, designed and built the first two homes his family lived in. He was a talented woodworker and especially enjoyed building furniture for his family and himself. He was also a gifted knife maker, gunsmith and machinist. He enjoyed photography and collected many cameras over his lifetime. He played tennis and golf well into his later years.

Paul loved a party no matter the size. He enjoyed life to its fullest and posted this quote from Hunter S. Thompson in his home: ''Life should not be a journey to the grave with the intention of arriving safely in a pretty and well preserved body, but rather to skid in broadside in a cloud of smoke, thoroughly used up, totally worn out, and loudly proclaiming, 'Wow! What a Ride!'''

Please join us to celebrate Paul's life on Friday, November 18th at 10:30 a.m. at Ludvigsen Mortuary Chapel in Fremont. There is no viewing but the family will be present from 6-7:00 p.m. Thursday, November 17th. A Masonic service conducted by the Fremont Lodge No. 15 A.F & A.M. will follow at 7:00 p.m. which is open to the public. Memorials suggested to The Salvation Army and Nebraska Children's Home Society.