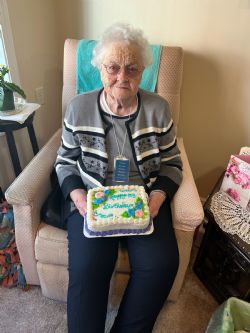 During her early years, Norma worked for various neighborhood families, providing assistance as new children were welcomed into the world. She married Elmer Katt on August 21, 1949 at St. Paul's Lutheran Church in Arlington by Pastor Carl Hellman. They lived on the Katt family farm for 69 years.

Norma was active with the Immanuel Lutheran Church quilters guild and helped make over 600 quilts for world relief. She was a member of the Ladies Bible Class, Lydia Circle and Women's Missionary League.

Norma was known for her passion for gardening, especially for flowers. She exhibited flowers at the Washington County Fair for over 50 years. She brightened the day of many friends and relatives with her flowers.