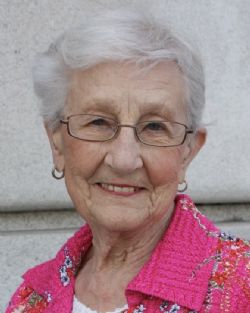 Jean was born on a farm near Hooper, Nebraska on September 5th, 1918, to Nellie (Taylor) and Clinton Snover. The date was also her mother's 24th birthday and her parents' first wedding anniversary. After her mother's death, when Jean was 3, she went to live with her grandparents in Fremont, and would spend the summers with her father (Clinton) on the family farm. She married Gerald (Jerry) Janssen on March 30th, 1939 in Council Bluffs, IA. She was the scheduler for the family business, Jerry Janssen Transfer, in Hooper. She was an avid reader, saying ''I think I read every book in the Fremont Library''. Jean loved to sew clothes for her young daughters, and was known for the afghans she created, having crocheted over 250 of them for family and friends. She enjoyed making hard candies, peanut brittle, and her famous cinnamon roll rings during the holidays. Jean was a volunteer in her community including the election board. She was a member of Redeemer Lutheran Church in Hooper, and of the Order of Eastern Star, Friendship Chapter 122 in Hooper for 75 years.

Jean was preceded in death by her husband of 50 years, Jerry Janssen; granddaughters, Stephanie Bowers and Emily Kubat; and great-grandson Christopher Bowers.

Jean loved and cherished her family, and she will always be remembered for being the most loving and caring mother and grandmother.

The funeral service will be 10:30am, Monday, September 19, 2022 at Redeemer Lutheran Church in Hooper. Burial will follow the service in the Hooper Cemetery. Visitation will be Sunday, September 18, 2022, from 2pm to 5pm, at the Ludvigsen Mortuary Chapel in Fremont, with an Order of the Eastern Star Funeral Service held by the Friendship Chapter 122 of Hooper at 5 pm. Memorials are suggested to Redeemer Lutheran Church in Hooper, NE.