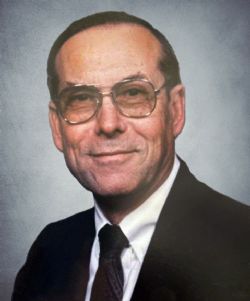 Al was born February 3, 1929 in Lincoln County Kansas to Ernest and Bertha (Mussmann) Detmer. He married Betty (Powell) on June 8, 1952 and opened a small café in Beverly, KS. They moved to Fremont in 1954 and he worked at Hormel for over 30 years. Once retired, he became the secretary at the local area of the Fraternal Order of the Eagles and went on to become the Nebraska State Secretary and is a member of the Nebraska Eagles State Hall of Fame. He was also a ritual member for the FOE for 27 years. Al treasured his membership in the Eagles and was dedicated to his responsibilities. Once he retired from the Eagles, Al drove the courtesy vehicle for Gene Steffy's in Fremont and thoroughly enjoyed being out in the public. Al was also a member of the Masonic Lodge. Al played golf regularly till he turned 90 and loved joining his grandchildren and great grandchildren in sports, school activities and holidays.

Al was preceded in death by his wife of 70 years, Betty. He's survived by his 4 sons: Brad and Karen (Muhle) of Fremont, Mike of Davenport, IA, Jerry and Nancy (Novotny) of Fremont, and Jeff and Margaret (Stanek) of Big Springs, NE. He has 9 Grandchildren and 7 great grandchildren who will miss his PaPa Al dearly.

The family will hold a private memorial service.

Ludvigsen Mortuary in charge of arrangements