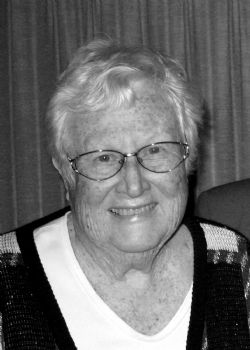 She is survived by her son Ronald Stork; her son Allen Stork and his wife Judy Junkman and their son Peter Stork. She was preceded in death earlier this year by her husband of 64 years, Floyd Martin Stork.

She was born in Waterloo, Iowa, the daughter of Luie Henningsen and Ruth (MInkel) Henningsen. She grew up in Waterloo on her grandfather's truck farm and graduated from Waterloo East High School in 1944. She attended Iowa State Normal School until she and her family moved to Banning, California in 1945. She received an associate's degree from San Bernardino Community College, her teaching certificate from the University of Redlands and taught in both the Barstow and Alta Loma School Districts. In 1969 she earned her Bachelor's degree in speech and theater from the University of La Verne.

She met her husband Floyd, the love of her life, when they both taught at Alta Loma Elementary School in 1950. They were married in 1952 at Redeemer Lutheran Church in Ontario, California. Phyllis spent all the rest of her years as a devoted companion to her husband and a loving mother to her children. She was an active member of the church community until her death. Phyllis and Floyd lived in the same home in Upland for more than sixty years where she was an active member of the community. She knew no strangers and offered hospitality to all who came to her door. She enjoyed visiting family and friends and will be missed by everyone who knew her.

There will be a memorial service at St Paul's Lutheran Church north of Arlington, on Saturday, December 2 at 2:00 PM, with burial in the church cemetery.

Ludvigsen Mortuary in Fremont is in charge of arrangements.