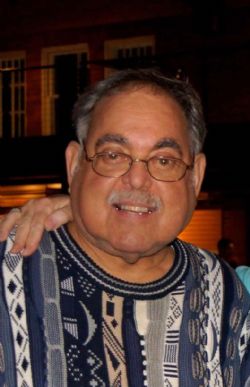 It is an amazing thing how a person's life and existence can be seen and captured in the stars and heaven, but there will be more on that later...

Our father and loved one, Marvin Paul Altman, passed away the evening of Tuesday, November 22, at 10:06 pm at the age of 78.

Paul, as he had been known throughout life, left us all much as he had lived. He moved on with a smile, jokes, and connections with those around him and the ones he loved. He selflessly gave of himself until his final breaths wanting and wishing for his family to have a loving Thanksgiving celebration regardless of his final fighting moments.

Dad was born in St. Louis, Missouri on November 18th, 1944. He was a headstrong boy who connected well with others which later became a chief attribute of how he lived his life. He was the loving son of Goldie (Eisenberg) and Benjamin Altman and brother to Harvey Altman. Paul as a young man participated in athletics and attacked life with an abundance of joy. The secret ingredient to his personality became a key part of his life both professionally and personally in how he connected with everyone he would meet and loved which was his humor, laugh, and smile.

Paul was his own king of one-liners. He lived with a smile for the purpose of making others smile. His laugh most commonly heard by himself following one of his own jokes or from good times and fun with those he loved was infectious, and it was the core of what let his soul shine as bright as it was.

Paul was loved by so many but held the heart of two, in particular, his first wife Francee Rife Altman, and his second wife Crystal Bahner Altman. Paul became the real-life Mike Brady bringing together the love he had for his personal three boys together with the love he had for his new three children of his new wife's family. It was a testament to the Godliness of his soul that he was so loved by this combined families as he grew to become the loving parent of Derek and Helen, Andrew and Jill, Brian and Meira Altman, as well as the new father of Diane (Martin) and John Wagner along with Mike and Brian Martin. Paul was the loving Grandparent of Maria' and Justin Scamehorn, Shauna and Jeffery Hines, Jeremy, Shannon, and Blake Wagner, as well as Grant, Jada, Daniel Chi, Yahonaton, and Rachama Altman. Our father also had the joy and love of being the Great Grandfather to Malea, Jaida, Corbin, Sofia, Raven, and Alex.

Paul used his personality and talents in life to help him succeed professionally as well. He began connecting with others as he pursued an acting career managing others at a fuel station in Hollywood, California. There he got to experience many a celebrity including Harrison Ford, George Peppard, and Elvis Presley to name a few while falling in love with the first of the two women he would come to love in life, Francee Rife Altman. This love for Francee and motivation to start a family and become a father led Paul on his journey to Omaha, Nebraska. There he began his formal career in sales in the family men's clothing store Stuarts with his father and brother-in-law before beginning his own store named for his two boys at the time DERRANS (Derek and Andrew). Family was a bigger part of Paul's life and existence than anyone would ever know as he and Francee codified their marriage one last time with his final son's birth in Brian Altman.

Unfortunately for Paul's first family as happens to so many marriages, life got in the way between him and Francee and an amicable divorce between the two occurred. This path was God's plan for Paul as it led to our father finding the second true love of his life in Crystal Bahner Martin. Both had come from previous marriages that did not survive to find the heart of the other to bind one another for the rest of their lives. In the aftermath of their first date, it was made clear to Paul from Crystal that love was the only thing she held in her heart and if a man was to have her hand again it would only be LOVE that she would even remotely allow to be the pursuit and covet. It was this bond of love that allowed them to bring their two families together.

Following their romantic first dance and courtship, they decided to begin a 30-year journey together where they would walk the path of life as one soul under God forever and ever. Crystal and Paul brought such love to their merged families and friends and such joy to one another. Whether it be sailing the Caribbean on an intimate cruise to holidays with family and friends or good old fashioned husker football experiences their focus was always aligned with God, Family, and good values.

Crystal and Paul celebrated their 30th year anniversary this year before Paul's passing. Biblically and Spiritually the number 30 represents BALANCE AND EQUILIBRIUM which is exactly what Paul and Crystal found in their lives together and their Love for one another. Their connection and bond to one another was predestined and the entirety of their initial journey's in life were put forth to become exactly what took place and all their individual experiences were purposely driven to bring their souls back together as one. They were both able to bring this connection to their families and friends in a process of love, joy, and healing for all as a direct result of their energy and love for each other.

Dad, Grandpa, and Great-Grandpa, we will all miss you more than you know and we all thank you for touching our lives.

As Paul was a man of the Jewish Israel/Hebrew faith in life and a descendant of Moses as his family was linked to the high priests of Levis as a part of the tribe of Levi it is a known connection of his faith that,

"Memory is a part of me, and history, apart from me."

This discussion comes because, in Judaism and God's tongue biblical Hebrew, there is no word for History. Instead, biblically the closest word associated with the concept of History was the Hebrew word Zikaron (memory), a distant cousin of history. This correlation and this lesson go far beyond semantics, cutting straight to the core of Jewish Hebrew teachings and the perception of the past.

You see, ''history'' is his-story, not mine. The first two letters of ''memory,''(in Hebrew Zikaron) however, spell me.
Because History is made up of objective facts, and memory of subjective experiences God has lesser concerns about these details being that which give us our identity and a part of our meaning. The truth is, God is less interested in dry facts than in breathing experiences. These breathing experiences mean that God's desire for us taught through Paul's lineage as a Member of the Hebrew Israel Jewish Faith is derived from tradition and ritual as a means of reenactment. Therefore in the Jewish faith, we don't just commemorate, we remember. We don't just recount someone's story, we diligently work to relive it as a direct part of our own using our memories of those we loved as a way to tie us to them and so on and so on. This is in essence how we connect ourselves to our generations and through that how we build our history.

We will always remember you Dad, Grandpa, and Great-Grandpa as a part of our lives which will work to continue yours through eternity.

It would be Paul, Crystal, and Francee Altman and their Family's honor for any and all loved ones to attend his viewing and final service to pay respect to his memory. An open viewing will be held on Sunday, November 27th from 2 pm to 5 pm at Ludvigsen Mortuary Chapel, 1249 East 23rd Street, Fremont, Nebraska, 68025 - (p)402-721-4440. The funeral will be 10am, Monday, November 28, 2022 at the Ludvigsen Mortuary Chapel with burial to follow in Memorial Cemetery. Memorials are suggested to the donor's choice.