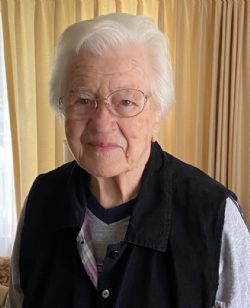 Rosella was born November 29, 1930 in Washington County, Kansas to Ernst and Bertha 'Niemann' Meyer. She grew up in Washington County, Kansas near what is now Hanover, Kansas. On April 5, 1953 she married Clarence Brei in Trinity Lutheran Church near Hanover. The couple moved to Fremont in August of 1956. Rosella and her sister-in-law Marilyn Brei did painting in homes and also painted at the Gifford and Stanton Towers. After Clarence retired from Midland the couple did upholstery work until retiring.

Rosella was a member of Salem Evangelical Lutheran Church and was active in several of the church organizations.

Rosella was preceded in death by her parents, brothers Robert and Donald Meyer, sisters Ernetta Kauffeld and Lorna Wienck and great-granddaughter Faith Brei.

The funeral will be 10:30am, Monday, November 14, 2022 at Salem Lutheran Church in Fremont. Rev. Shari Schwedhelm will officiate. Burial will follow in Memorial Cemetery. Memorials are suggested to Salem Lutheran Church or the Clarence and Rosella Brei Scholarship Fund at Midland University. Visitation will be Sunday, with the family present from 2pm to 5pm at the Ludvigsen Mortuary Chapel in Fremont.