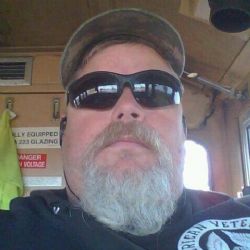 Barry was born July 16, 1965 in Tucson, Arizona to Ralph and Angie 'Rudolphi' Richard. He was raised in Tucson until he was 13 years old. He then moved to Boys Town in Omaha and graduated from Boys Town High School in 1981. Barry married Thersa and together they had two children, Barry and Brooke, they later divorced. Barry served in the United States Army from 1986 to 1991 and served with the 172nd Transportation Unit during Desert Storm. After his military service he worked at Railcar Specialties as a mechanical engineer and drafter for 17 years. In 2003 he began working for Union Pacific Railroad. In 2010 Barry married Randi 'Peterson' Richard. In the marriage Barry inherited Randi's two children Cheyenne and Lane. Barry loved Husker Football, Dallas Cowboys football, Nascar and welding/fabricating.

In 2000, he started participating with the American Veterans Motorcycle Club where he received his road name 'Blank' because he left the form blank. In 2001 he became a full patch member, and in 2008 he started the Fremont chapter and was president until his exit.

Barry was preceded in death by his mother Angie Richard.

There is no viewing but the family will receive friends at the Ludvigsen Mortuary Chapel on Saturday, November 12, 2022 from 1pm to 3pm. There will be a celebration lunch at the Fraternal Order of Eagles, Aerie #200 in Fremont on Sunday beginning at 1pm. The committal will be held at a later date in the Omaha National Cemetery.