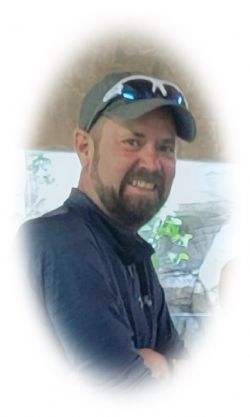 Brent Alan Zakovec, age 41, of Morse Bluff passed away on Friday, July 29, 2022 at Nebraska Medicine in Omaha surrounded by his family.

Brent was born on June 23, 1981 in Fremont, Nebraska to Francis and Holly 'Dahl' Zakovec. He was raised in Morse Bluff and Dodge. Brent graduated from North Bend Central High School in 2000. As a teenager and into his 20's he worked for Bluff Gravel Company until he began his true passion of farming full time. He was a member of St. George Catholic Church in Morse Bluff. Brent had 24 years of Fire Service with Morse Bluff Fire Department and served as Chief for 15 years. In conjunction he also served on Cedar Bluffs Fire Department.

Brent married his high school sweetheart, Brook Ladenburger, on August 20, 2005 at St. Charles Borromeo Catholic Church in North Bend. They built a life together on their farm south of Morse Bluff where they were blessed with 4 beautiful children.

When Brent wasn't dedicating his time to farming or the fire service, he also enjoyed creating almost anything out of steel. From yard ornaments to building useful tools or fixing things on the farm, if it could be fixed or built with a welder, he could do it. Brent was known to be the life of the party or center of attention, putting smiles on everyone's face. He also had a passion for hunting and rodeoing. He created many new friends and hunting partners on his hunting trips, but probably none as special as being able to take his daughter, Ashtynn, on her first successful deer hunt this last year.

Brent was dedicated to his community and would drop everything at a moment's notice to help anyone.

Brent was preceded in death by his step-father Richard Wennstedt.

The Funeral Mass will be 10am, Friday, August 5, 2022 at St. Charles Borromeo Catholic Church in North Bend. Burial will follow in Killian Cemetery. Visitation will be Thursday, 4pm to 7pm at St. Charles Catholic Church in North Bend. Rosary Services will be held at 7pm also at the church. Memorials may be directed to the Morse Bluff Volunteer Fire Department or to the family.


Thank you to Justin Mensik for putting together this wonderful tribute video including the funeral procession to the cemetery.