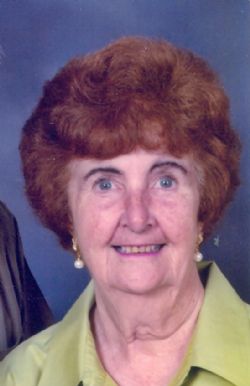 Gladys was born January 20, 1929 in Hooper, Nebraska to Earl and Luella 'Boell' Dahl. She was raised in the Hooper/Scribner area and graduated from Scribner High School in 1946.

She married Kenneth Low on February 25, 1949 in Scribner at United Lutheran Church. She lived in the area her entire life. After high school Gladys worked at the Fremont Tribune then at Dahl's Steakhouse for many years. She also sold Stanley Home Products. In 1995 Gladys was the Scribner Chamber of Commerce employee of the year.

Gladys enjoyed playing cards in several card clubs. She was also a member of United Lutheran Church in Scribner.

The funeral will be 10:30am, Tuesday, April 19, 2022 at United Lutheran Church in Scribner. Burial will follow in the Scribner Cemetery. Memorials are suggested to Scribner Volunteer Fire or Rescue and United Lutheran Church. Visitation will be Monday from 3pm to 8pm with the family present from 6pm to 8pm at Ludvigsen's Scribner Funeral Chapel.