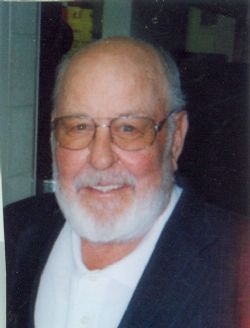 Norman A. Petersen was born April 17, 1938 to Alvis and Agnes 'Monson' Petersen on their farm near Hooper. Norman attended an elementary country school near his family's farm and graduated from Uehling High School. After high school he joined the Army Reserves and returned home to farm. On June 1, 1958, he married Janice Wheatley at St. Paul Lutheran Church in Uehling. To this marriage, three children were born, a son Brad, a daughter Brenda, and a son Barry. Norman lived on the farm most of his life until he moved to Uehling and then the Hooper Care Center in 2015.

He was a lifetime member of Elim Lutheran Church holding many of the offices within the church. He was on the Sheridan School Board, and the Washington County Feeders Board. His greatest joy was farming, driving his Super H tractor on tractor rides, and attending tractor pulls. He was a fourth generation of his family to farm the same land for 100 years. In 2012, the family's farm was given a Nebraska Pioneer Farm Award by The Knights of Ak-Sar-ben Foundation, a recognition given to farms owned and operated by the same family for more than 100 consecutive years.

Norman was always a happy, go lucky guy who loved the Uehling and Hooper communities and was very social attending many community events. He had a lifelong love for sour cream raisin pie, chocolate chip cookies or anything sweet.

The funeral will be held at 10:30 a.m. on Tuesday, October 12, 2021, at Elim Lutheran Church, Hooper. Pastor Judy Johnson will officiate. Burial will follow in the Elim Cemetery. Memorials are suggested to the family for future designation. Visitation will be Monday, October 11, 2021, from 3 p.m. to 8 p.m., with the family present from 6-8 p.m. at Ludvigsen's Hooper Funeral Chapel.