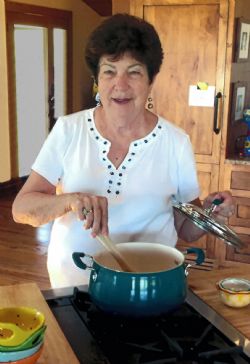 Jeanne was born January 5, 1942 in West Point, Nebraska to Leonard and Helen 'Koester' Tingelhoff. She was raised on a farm near West Point and graduated from Guardian Angels High School. After high school Jeanne worked as a receptionist at St. Francis Hospital in West Point. Also at the time, Dennis was working at Farmers Union Co-op in Snyder, Nebraska. Joan Ebel, Jeanne's first cousin, was working at the Snyder Co-op too and she introduced Dennis and Jeanne. The match was made and they were married July 8, 1961 at St. Mary's Catholic Church in West Point, NE. Jeanne became involved in book keeping duties at the Co-op soon after.

In 1971, Dennis and Jeanne moved their family from Snyder to Scribner in order for Dennis to manage Scribner Grain. Jeanne continued in her book keeping role for 54 years, still working there the week of her death.

Jeanne was known for her cooking, her love of recipes and cookbooks, red geraniums and poppies. Jeanne had a soft spot for children in tough situations and she was generous to them behind the scenes. She wasn't afraid to reach out to a stranger either if she was trying to get something accomplished. She was a member of St. Lawrence Catholic Church in Scribner and its guild. She enjoyed frying the steak for the church's steak supper every year since it's inception. Jeanne enjoyed their tickets to Husker Volleyball games, her trips with Dennis in the motorhome and taking the entire family to Adventureland every year for nearly 30 years in a row.

Jeanne was preceded in death by her parents, brothers-in-law Jim Weiler and Vernon Baumert, and a great granddaughter Emersyn Kelly.

Memorial Mass will be at 10:30am Saturday, October 21st at St. Lawrence Catholic Church in Scribner. The Rev. Damien Wee will officiate. Visitation with the family will be Friday, October 20th from 4pm to 7pm with a prayer service at 7pm at the church. Due to being an organ donor, private burial will take place at a later date. Memorials are suggested to the Scribner Library or Team Jack Foundation for Pediatric Brain Cancer.

Ludvigsen's Scribner Funeral Chapel is in charge of arrangements.