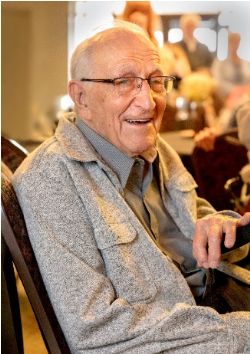 William (Bill) G. Heusel passed away on October 22nd , 2022, peacefully in the company of family at South Haven Living Center in Wahoo, NE at the age of 99.

''Doc'' Heusel spent the majority of his career as a family physician living in and serving the people of Hooper, NE and surrounding farms and communities. He lived in his home in Hooper to the age of 98, having been preceded in death by his wife of 52 years, Mona, who passed away in 2012.

William George was born on February 22, 1923, to Henry and Maude Heusel of Gibbon, NE. He had three brothers, Logan, Gary, and Lorton, and a younger sister, Marilyn (Heusel) Eberspacher, who survives him, residing in Milford, NE. Bill Heusel attended Shelton High School, and through the generosity of a former teacher, was able to attend the University of Nebraska with his brothers, Logan and Gary. Following travels in his youth to India and El Salvador, Bill committed himself to a career in medicine, and received his M.D. from the University of Nebraska College of Medicine, followed by a medical internship and general practitioner residency that brought him to Immanuel Hospital in Omaha, where he met Mona Larson, a director of nursing there, and who would become his wife.

Bill and Mona Heusel moved to Hooper in 1962, where Doc set up a family medicine practice in a busy clinic on Main St. They raised four children there, who survive them: Mindy (and James) Kankel, of Bettendorf, IA, Laurie (and Tracy) Nesson, of Lincoln, NE, Jonathan (and Jean Goracke) Heusel, of St. Louis, MO, and Karin Siefkes (and Scott Stevens), of Omaha, NE. In 1971 Doc Heusel and his family moved to Harlingen, TX, where Doc worked to establish Su Clinica Familiar, a medical group practice focused on the underserved Chicano populations in Harlingen and Brownsville. The Heusels returned to Hooper in 1972, and Doc streamlined his medical practice, which eventually moved to a new facility on Fulton St., where it remains today.

The Heusels were members of Redeemer Lutheran Church. Doc retired from his Hooper medical practice in 1989, but continued to work as a locum tenens, traveling to places like Baudette, MN, Kayenta, AZ, Green Bay, WI, and Barrow AK, echoing earlier medical missions he undertook to Pine Ridge and Wounded Knee, SD to serve Native American communities, for whom Doc held a deep respect and sense of connection throughout his long life.

Bill, Mona and their family enjoyed their lives and friends in the generous and warm community of Hooper immensely. They had twelve grandchildren and eight great-grandchildren, many of whom were able to be with Doc at South Haven in his final days.

Ludvigsen's Hooper Funeral Chapel is in charge of arrangements.