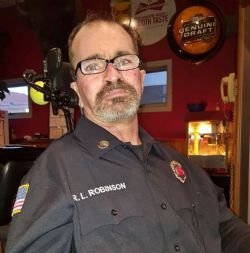 Robert was born February 1, 1962 in Lincoln, Nebraska to Leslie and Mary 'Pacas' Robinson. He was raised in North Bend and graduated from North Bend Central High School in 1981. He joined the work force after high school working for Platte Chemical in Fremont, BD in Columbus and finally Scribner Grain. Robert married Michelle Jacobsen on September 28, 2013.

Robert was preceded in death by his first wife JoAnn and father Leslie.

There is no viewing but the family will receive friends Friday, September 2, 2022 from 6pm to 8pm at Ludvigsen's Scribner Funeral Chapel in Scribner. The celebration of Robert's Life will be 10:30am, Saturday, September 3, 2022 at the Scribner Fire Hall. Memorials are suggested to the Scribner Volunteer Fire Department and Rescue Squad.