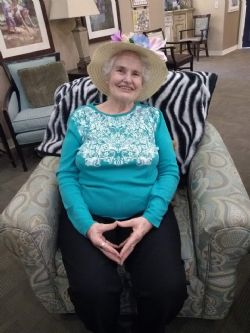 Iris was born January 14, 1938 in Hooper, Nebraska to Alvin and Mercedes 'Mulliken' Christensen. Iris married Richard D. Smith and together they had 3 children. On January 14, 1973 Iris married J.L. 'Dok' Doksansky. She was a bank teller at the Bank of Valley, waited tables and then became the owner of The Cavalier Cafe, Assistant manager at Walgreens Grill, worked at Charleston Inc. and finally Historian at Midland College (now Midland University) for many years.

Iris' community activity included being a Lifetime member of the Historical Society, May Museum docent, Fremont Midland Entertainment Series board member and past president, Volunteer member of Habitat for Humanity. Iris also sang at the tent at John C. Fremont for many years and was a member of the Chancel Choir at UCC church for decades.

There is no viewing but the family will be present from 6pm to 8pm on Tuesday, July 26 at the Ludvigsen Mortuary Chapel to receive friends. The memorial service will be 10am, Wednesday July 27 at the Fremont First United Methodist Church in Fremont. Pastor Jill Harmon will officiate. Burial will follow in Ridge Cemetery. A memorial fund will be established at a later date.