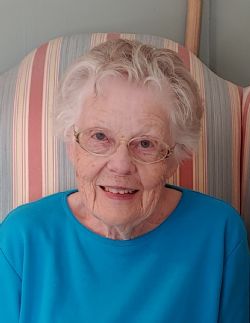 Evelyn Louise Sorensen Houston, 93, went home to be with her Lord, surrounded by loved ones, on Friday, October 22, 2021.

Evelyn was born September 29, 1928, on a farm near Belvidere, NE, to Louie and Elizabeth (Houseman) Cording. Evelyn often talked about what wonderful parents she had and how great her childhood was. They lived there during the hot, dry Depression years and Evelyn would recall the dust storms with orange colored dust clouds rolling in from Oklahoma. When she was 10, they moved to a farm east of Cushing, NE. Evelyn enjoyed talking about those years…cleaning the house, washing dishes, bringing the milk cows in during the summer, and milking them, too.

Following graduation from Cushing High School, Evelyn attended St. Francis School of Nursing, in Grand Island, graduating in 1949. Her first job was as Surgery Supervisor at St. Francis Hospital. Upon hearing of an opening at the Fremont Hospital, Evelyn took the job, where she met Robert (Bob) Sorensen. They married on September 7, 1953. They moved to a small apartment in Omaha where she worked at Children's Hospital, in Surgery. She also worked in Surgery in Flint, Michigan, where Robert did his residency.

After moving back to Fremont, and with four children, Evelyn stayed at home with them, but filled in from time-to-time at Dr. Bob's pediatric office. In the seven years before his death in 1977, she worked full-time as the Office Nurse. Following his death, she worked full-time in Labor and Delivery at the Fremont Hospital.
She and Dr. Bob, along with their children, enjoyed traveling in the US and Europe, especially in Denmark, where the Sorensen family originated. Evelyn loved gardening, being involved with church activities, and was an active member of Esther Circle for many decades.

Evelyn enjoyed close relationships with her 3 sisters, especially family reunions and Christmas in July celebrations. They have remained close to this day.

In 1981, Evelyn married Robert Houston and with that union, the family grew. In almost 25 years before Bob's death, they enjoyed their life together at Woodcliff, growing orchids and attending model train shows. Their children and grandchildren spent many holidays, long summer days swimming, and every Fourth of July Extravaganza at Woodcliff.

Evelyn frequently commented that she felt so blessed by having her children, grandchildren, and great-grandchildren close to her. She spent many hours viewing family photos on her digital picture frames in her kitchen and living room. Evelyn loved her family and talking about happy childhood memories, as well as her little house on Pebble Street, where she spent her final 9 years.

The funeral will be 2pm, Friday, October 29, 2021 at the First Baptist Church in Fremont. The service will be followed by the Nebraska Nurse Honor Guard ceremony. Burial will be in Ridge Cemetery. Memorials are suggested to the First Baptist Church. Visitation will be Thursday from 4pm to 8pm with the family present from 6pm to 8pm at the Ludvigsen Mortuary Chapel in Fremont.