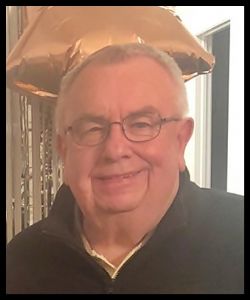 ***** The family is requesting masks be worn at both the visitation and funeral service.*******


Michael Richard Funk, age 73 of Fremont
passed away after a brief battle with cancer on Tuesday, October 19th at Dunklau Gardens.

Michael was born on September 15, 1948 in Gothenburg, NE to Barbara 'McVicker' Funk and Richard Funk. Michael grew up in Fremont and graduated from Fremont High School in 1966. He attended Wayne State College and was active in the Army Reserves from 1967-1995. He rose to the rank of 1st Sergeant.

Michael married Janet Lee Smith on February 5, 1972 at Trinity Church in West Point, NE. For many years, Michael enjoyed his involvement with Fremont High School athletics. He was the ''Voice of the Tigers'' for basketball games. He loved helping with a variety of sports including football, track, wrestling, and powerlifting. He was proud to serve on the Fremont Booster Club for 20+ years. Mike also loved being a Grandpa. He loved attending his grandchildren's events.

Michael is survived by his wife, Janet; his daughters, Michelle (Duane) Kohl of Lincoln, Mindi (Brad) Wendel of Omaha and grandchildren Chellsea (Preston) Schulte, Collin Kohl and Fiancée Hannah Ochsner, and Callie Kohl all of Lincoln and Alexander Wendel of Omaha. He is also survived by Brother-In-Law, Wayne (Peg) Smith of Omaha and Sister-In-Law, Shirley (Jim) Sendgraff of Maryville, MO and nieces and nephews.

He was preceded in death by his parents, brother Mark, sister Susan and niece Amy.

Memorials can be directed to his family and to the Fremont Booster Club.

***** The family is requesting masks be worn at both the visitation and funeral service.*******