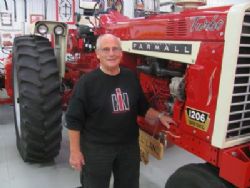 Jerry Warner Mez, son of Max and Wilma (Warner) Mez, was born on August 30, 1940 in Falls City, Nebraska. He attended school in Avoca and graduated with the class of 1958. After graduation he attended Midland College in Fremont, Nebraska, where he met Joyce Schmid. He graduated with a Bachelor's Degree in Business. Jerry and Joyce were married on August 4, 1963, in Lodgepole, Nebraska. To this union they had three children: Jay, Joel and Joy.

Jerry left from his honeymoon and entered into the United States Army, where he was stationed in Korea during the Vietnam War. After he was honorably discharged he returned to Avoca to work for his father at Avoca Implement, eventually taking the business over for his father. Jerry retired from running Avoca Implement in 2008 and began working on his dream-Farmall-Land USA museum, an incredible collection of all things Farmall.

Jerry was involved in many organizations throughout his life including: School Board, Rotary, Nebraska and Iowa Farm Implement Dealers Association, Antique Collectors Clubs, was a Pee Wee Baseball Coach and Cub Scout leader and other activities that involved his children. Jerry and Joyce were avid travelers. They traveled the world and also and loved spending time in Lincoln, Nebraska, Fremont, Nebraska and Las Vegas, Nevada. Above all, Jerry was a supportive husband and father and was given the status of "Grandpa" by the grandchildren whom he loved and adored unconditionally.

On Wednesday, September 29, 2021, Jerry passed away with family by his side at Hansen House in Council Bluffs having attained the age of eighty-one years and thirty days. He was preceded in death by his parents Max and Wilma; brother Ronald; step mother Lottie; and step-brother Willis Rock.

The Family of Jerry Mez is requesting that face masks be worn to enter at both the visitation and funeral service. Thank you!

Visitation, Friday, October 8, 2021 at Pauley Jones Funeral Home in Avoca, Iowa from 2:00 PM - 8:00 PM. The funeral will be Saturday, 10:30am at Trinity Lutheran Church in Avoca, burial with Military Honors at Graceland Cemetery in Avoca will follow.