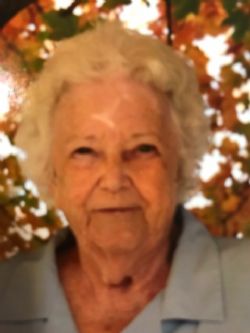 Enid worked at Mode O Day in Ottumwa when first married. When they moved to Bloomfield, she was a homemaker. She and Breezy moved to Troy and lived there several years before moving to Pulaski, and Oskaloosa in their later years. Her years she worked as a Surgical Tech at the Davis County Hospital were her favorite memories and she often spoke of her co-workers. After retirement, she and Breezy would visit the grandkids and made several trips to Nebraska over the years.

She enjoyed watching her sons, and especially loved watching all her grandkids, in their sports. Christmas was Enid's favorite holiday and she enjoyed it up to the very end. Her favorite perk was getting her hair fixed. She always in a good mood after a visit to the salon. She loved teddy bears and had an extensive collection. She loved their beloved Yorkie Tony and her Grand-dogs. She was an avid reader, enjoyed doing crossword puzzles, was a very good card player, and loved the Sundays with the family doing dinner and playing cards after. Family was everything to her. Over the years, she and her very good friend, Beulah Archer, enjoyed doing ceramics together. She and Breezy also enjoyed the Hayseeders and dancing for many years with their good friends from Troy. She was a former member of Rebekah Lodge in Troy.

After moving to Nye Legacy, she made many new friends and was dearly loved by the staff. She was voted to be the Residents' representative at the care center. She was never shy about speaking her mind and made sure things were brought to one's attention. She was especially touched when she helped deliver cookies to the homeless shelter. Upon returning to the care center, she started a quarterly collection of items needed there. This was her special project. She never wanted anyone, especially kids, doing without. She loved watching her birds outside her window and was especially fond of Cardinals She will be greatly missed by all who got to know her.

She was preceded in death by her parents, brothers Dennis and Dale Langford, and several brother and sisters-in-law.

Services will be Saturday, September 18th at Wagler's Funeral Home in Bloomfield, Iowa. Visitation, with family present, will be prior to the funeral 11:00 a.m. - 1:00 p.m. Funeral Service to immediately follow. Burial at I.O.O.F. Cemetery in Bloomfield.

In lieu of flowers memorials can be directed to the family to be donated to: LifeHouse, homeless shelter, Fremont, NE or Special Olympics (Fremont Program), Fremont NE.