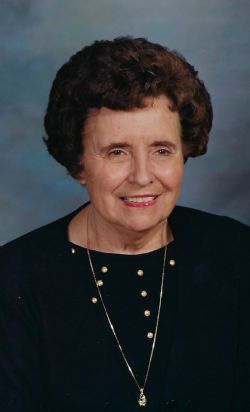 She was born in Fremont on April 13, 1932 to Norton A. and Martha E. (Janowski) Pruyn. She was the third of four sisters. She graduated from Fremont High School in 1950. Gretchen had an amazing group of friends from her graduating class that had kept in touch all through the years. She was very blessed by their friendships. She married her best friend, Jere Johannesen on March 13, 1953. Except for the short time she spent with him while he was stationed in San Francisco, she lived her entire life in Fremont.

To this union were born three children, Tess (Bob) Welstead, Brad (Chris) Johannesen, and Scott (Sherri) Johannesen. From their acreage just outside of Fremont, they enjoyed watching their children grow up. Their special time each year was a family vacation at a resort at Rush Lake in Minnesota. Gretchen never missed a year in 50 years. She also owned and operated Watermelon Seed Maternity Shop for over 10 years until deciding to retire. Gretchen's pride and joy were her nine grandchildren and sixteen great grandchildren. She would often say, "Not an ugly one in the bunch." She thoroughly enjoyed any time she spent with any of them.

She was preceded in death by her husband, Jere, her parents, three sisters and great grandsons, Gabriel and Nathanael Adams.

Ludvigsen Mortuary in Fremont is in charge of arrangements.

To watch a recording of the service please use the following link: